Producer's Cloud A shout out to Mr. Enrico Tomaselli & Magmart, Video Under Volcano

Magmart, International Videoart Festival, is celebrating the 50th year of video art: "Magmart | video under volcano VIII edition start in 2012 and will end in 2013, conventionally considered the fiftieth anniversary of videoart. ... So, this edition is very important for us, and especially for videoart. We hope that artists' participation will grow again and again, for amount and for quality. ... We hope that videoart can become really 'adult' along this year: its time!" (…

The exhibition liquidDocs_02: ÀNGELS MARGARIT_MUDANCES and presentation of the graphic design and publishing process for Bookmagazine liquidDocs_02, a special edition on choreographer Àngels Margarit_Mudances. With a performance…

I am directing a performance of 5 dancers in Nacht van de Nacht in Vlaardingen at October 27 from 20:00 hrs in the Oranjepark in Vlaardingen. I made a piece of four female dancers in white costumes conquer the light pollution (part of Honza Svasek). The female dancers are: Sonia Egner, Ingrun Schnitzler, Clara Burdet and Alice Pons. Music by Michal Osowski. … that's an easy answer: when she finds her throughline.

very happy to have discovered the inciting incident of my story - which gives my central character a throughline + motivation, and my pivotal character/antagonist a reason to be in the story besides looking like a 21st century samurai pimp.

this particular study needs a lot of technical development, but i have mastered a major hurdle in developing TYFTB (thank you from…

“How do our own experiences slip out from under the frames we put around ourselves (and put on by others) in order to identify?”

Boston-based Hayley Morgenstern and Creighton Baxter (quoted above) will perform It Might Get Better, a…

Producer's Cloud artist's Life 101: thank you from the bottom, goddammit

as we all know, art is a lot of hard work. it took me 5 hours to do all the things i needed to shoot short entreactes for my new live-action storyboard TYFTB. there is a character, either fantastical or supernatural TBD, who haunts the hallway in the middle of the night at a mental hospital  - the setting of the movie.

i used to be a sculptor. some of my wood figures were so big that i would work on one side all day and i would have to wait…

The term "Performance Art" has come to mean many different things, with an interpretations and uses as wide and vast as the oceans.

How do you differentiate the vastness of the various Performance Art meanings? It can mean the perfornativity of a Mercedes to the performativity of a pinky . . . .

To us, the meaning is specific to a particular art form that we live and present on a regular…

commitment. the word that came to mind when i started watching this Kool: Dancing in My Mind, Robert Wilson's homage to Japanese dancer and choreographer, Suzushi Hanayagi. it also came to mind what the best people who have taught me all said - when you move, move like you mean it and know why you mean it and where you came from. 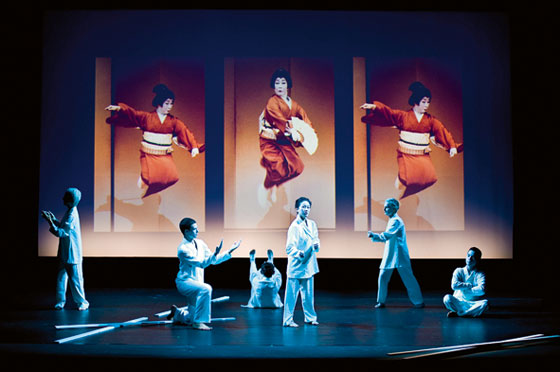 Producer's Cloud commitment. the word that came to mind when i started watching this, Robert Wilson's Kool: Dancing in My Mind. and what the best people who have taught me all said - when you move, move like you mean…

commitment. the word that came to mind when i started watching this, Robert Wilson's Kool: Dancing in My Mind. and what the best people who have taught me all said - when you move, move like you mean it and know why you mean it and where you came from.

i am having an email discussion with an artist friend about artist statements. she is a good writer and communicates really well about others' work, but when she brought up the issue of summary/synopsis and i responded "artist statement," things got pretty interesting:

[me] the video relays the message. i do think artists owe the audience an intro, statement of intent, history/synopsis/description of the origin. people appreciate…

Developing the blog on this performance: some days of grief are worse than others - today is pretty bad: today i finished my movie, Indigo Lady A Performance Art Movie (except for tweaking sound) and Mama is not going to see it. i think she would have liked it - she weirdly seemed to have the gene for "getting" avant garde.

The 2nd edition of the Month of Performance Art - Berlin (MPA-B) closed at the end of May 2012 with an impressive programme, featuring hundreds of performances, workshops, talks, exhibitions, installations and site-specific actions.

Producer's Cloud my movie is done - long live my movie