From the Thyssen-Bornemisza Art Contemporary Collection
In association with the Mostly Mozart Festival
August 3 – September 9, 2012 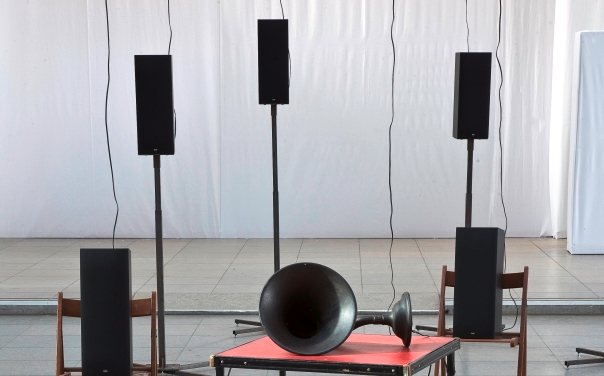 The largest sound installation to date by artists Janet Cardiff and George Bures Miller, The Murder of Crows is a compelling “sound play” that envelops the audience in an unexpected physical and aural environment. Moving and weaving through ninety-eight speakers mounted within the…

Completely Naked starts a new project as a natural evolution from Flashing Bodies: "The Movie!" 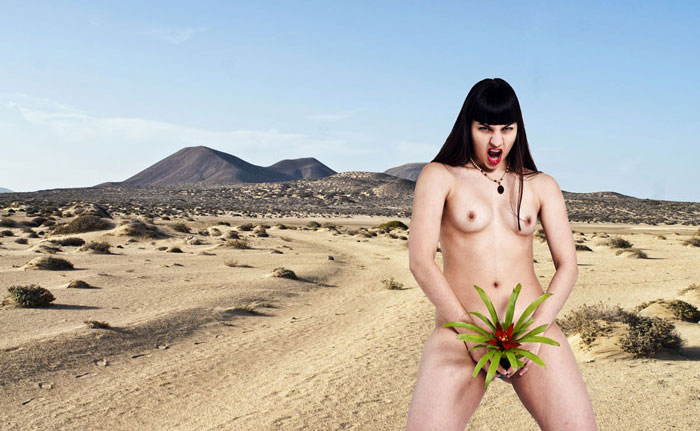 Kelly Copper and Pavol Liška of Nature Theater of Oklahoma have launched OKRadio from their closet radio studio in Long Island City (NYC). During their first podcast Kelly discusses their mutual love and creative connection with recorded media and Pavol explains his history…

Nature Theater of Oklahoma is a New York-based performance group under the direction of Pavol Liska and Kelly Copper. The ensemble strives to create an unsettling live situation that demands total presence from everyone in the room. Using readymade materials, found space, overheard speech, and observed gesture, and through extreme formal manipulation and superhuman effort, they seek to effect a shift in the perception of everyday reality that extends beyond the site of…

Reza Abdoh, avant-garde director, playwright, company leader and poet, was born on February 23, 1963 to Ali Abdoh and Homa Oboodi in Teheran, Iran. At the age of seven, he saw Peter Brook’s production of A Midsummer Night’s Dream in London and was deeply affected by it. Although…

Herr Neumann, what is stage design for you?

To begin with, it’s a space in which actors will conduct themselves. But it’s also a place where life happens. I have the wish to be able to facilitate a type of existence on stage that is more than a mere staging. The people there spend a lot of time with one another, not least of which is…

THE NEW DEADLINE IS AUGUST 15

Through this Open Call, four performances/theories will be selected by a peer panel. Over the course of three months, the conference organizers will provide space and other resources to these theorizing projects. Click …

The Light Surgeons operates as a multimedia production company from a base in east London, producing a wide variety of creative projects from the commercial to artist lead. Their work spans many diverse mediums; print, photography, motion graphics, short films, exhibitions and installations. Over the past ten years they have helped to pioneer new forms of cross platform practice, particularly with their audio visual performances,… Hotel Modern was established in 1997. Its members are Arlène Hoornweg and  Pauline Kalker, who both graduated from Arnhem Theatre School, and visual artist, model maker and performer,  Herman Helle. The group works together with (sound) artists for their performances, including Arthur Sauer (The Great War, Rococo, Shrimp Tales) and Ruud van der Pluijm (KAMP). They blend visual art, object theatre, drama, music, film, modelling and performance in… Thousands of professional dancers, choreographers and teachers from all over the world, come together, work together, for five weeks, in one city – ImPulsTanz.

1984. In Austria‘s leading cultural city Vienna the cultural manager Karl Regenburger and the choreographer Ismael Ivo launch the Internationale Tanzwochen Wien in order to give contemporary dance a voice in Austria. With…

The Italian contemporary performance collective, Societas Raffaello Sanzio is one of the most recognized and sought after Italian companies of the past decade.  Founding leaders of the company include Claudia Castellucci, Romeo Castellucci, and Chiara Guidi.  For the first 20…

MoMA PS1’s educational program Summer School returns in August 2012 for its second iteration. An annual series of workshops, lectures, and discussions, Summer School brings students together for a focused conversation on contemporary practice with artists, authors, musicians, curators, theorists, and scholars who have made significant contributions in their respective fields. Modeled after European summer academies, Summer School turns the grounds of MoMA PS1—an…

Erin Jonhson and I are working on a new piece called "Bobinetting" for the ZERO1 Biennial in San Jose this January. More information to come soon, but until then:

Bobinetting is the contemporary appropriation of an anachronistic feminist device. In 1832 French ballerina Marie Taglioni dawned the first tutu to dance the ballet La Sylphide. The tutu is made of tulle, light fabric that consists of strong hexagonal stitching. The light and strong makeup of the…

Kate has just begun work on her new performance installation, OffCastOff Project.  In Footscray, where she lives, there are many discarded things.  TVs.  Rubbish.  This installation tells the stories of people we might like to treat in the same way, using discarded things as the medium.  You can find out more at https://www.facebook.com/pages/OffCastOff-Project/238310612956543

Kate's website is a place to wind down, switch off, and interact with her artwork. Read, look, listen, imagine, and think.  Please visit at www.katebuttery.com.au